Two men pose somewhat awkwardly. They are bare-chested or wearing a T-shirt, with baggy underpants under bulging stomachs. They differ in age, and seem unaccustomed to playacting…The backdrop is a yellow wall with an artificial wainscot reminiscent of country cafés in the fifties. The floor is smooth and polished, with light shining in from the side. Sometimes switches to open air scenes in an orchard… The two characters dance a decidedly unlanguid, they simulate a fight, pretend to run a race. They offer each other fruit, cross their hands over their bellies like our forebears being banished from the earthly paradise… The image mimic the masterpieces of baroque or renaissance painting: the death of Procris, Poussin’s runners…The strengh of these photographs, devoid of any social context, where the bodies present conspicuous parallelisms and roundness and where family lumps and bumps are left to burgeon forth, lies in their
rewakening old memories, almost myths, yet verging on ridicule…Limbs, bellies, backs, shoulders and napes speak for themselves, silencing all those gasbags who drone about Mankind.
The drawing on the other hand, are hand-made images of metaphors. The technique is a hundred thousand years old, only slightly younger than the intelligence itself. It was used on caves walls and had been repeated endlessly ever since. In weighing up man, the pencil outlines his soul, capturing its nonsense, pleasure and facets. Utlimately, the thickeness of the lead can send the subject to heaven or hell. Such is the power of drawing, a brainchild, tough on those who cannot fathom it out, merciless when we let our spirit wander into it, and not our feet…
The meeting of photographs and drawings generates different human creations from those of the sword. Since we are condemned to global warming, that is to say, to the denial of our identities at best and at worst to slow progress towards death, let’s see how we can get out of the humanism of the past and move towards trash industry. First, we are faced here with mere extras, inexperienced actors, that photography reduces to pink blobs, and projects outside the sociocultural context by the subterfuge of dance postures, embraces, defunct and comic culture…
The daughter photographs her mother’s drawings, she photographs her father and brother while her mother draws her son and spouse, the various viewing angles shedding different and physical and mental light on the subject…We can be mesmerized by a shiny object, seeing nothing else.We have had that terrible cataract removed, the blinkered perspective, that western blight that consists in seeing with just one eye in a given direction, though to be the right one because there are no other… This sickness is common to television screens and popular cinema. All this despite the fact that the impressionists had realised how to break away from black and white, that is, out of scientism and religion, those wooden legs for
Males posing en Francais
aesthetic cripples…But alas, the Society of Men is as sacred as the golden calf and art teachers are good amateur sociologists…Where is there space for parents-children relationships ? What nature and what friends for bodies born of one another ? Whow does the sun need to please ?
When inheritances come under the scrutiny of lawyers, experts and tax authorities, that’s when we return to dust…then idle fancy, the dancing, the shouting, the disguises, the eyes, the freshness of the soul float cloudwards…In an incestuous mixture of styles and techniques, the nuclear family is spared the passing of time, reunited either side of the lens of pastimes that have not changed much since the beginning of time…A kind of freedom, a blood pact made with the heart is traced like the magic of ancient Egypt, when walking figures and flights of birds were immortalized unde the sun’s fiery ball. 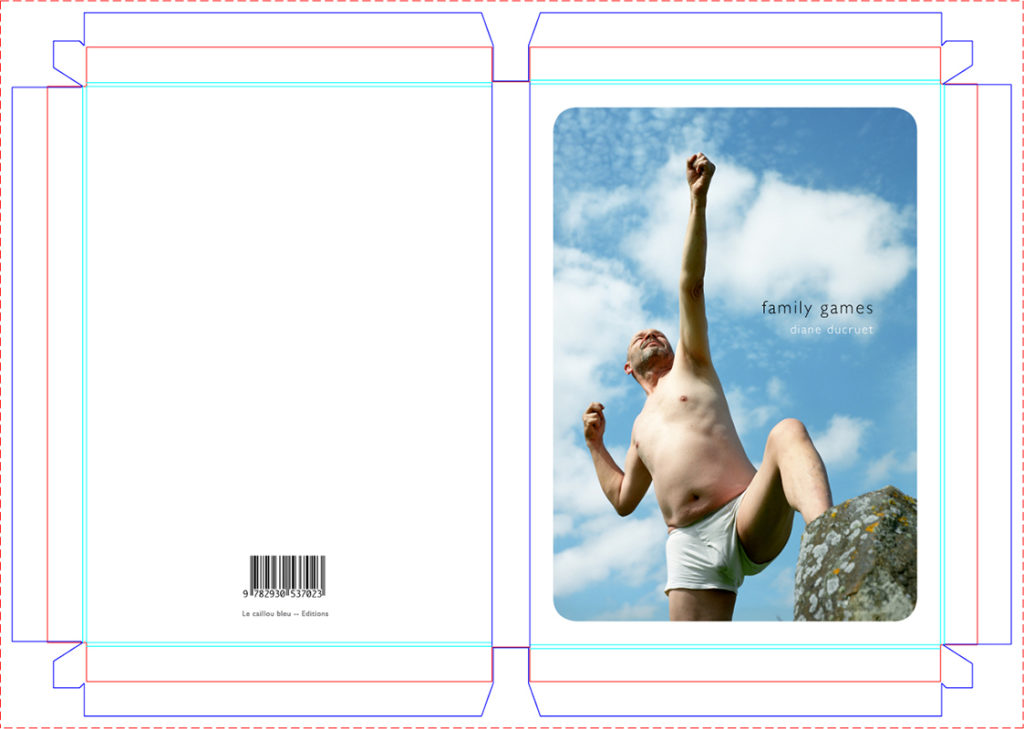 Family Games review
“In this brilliant photobook, French photographer Diane Ducruet has come up with a thought-provoking series of staged portraits that play with the ideas of family dynamics, identity, control, influence, postures of power, and more.(…)”

Family Games is clever work, and worthy of a careful look.