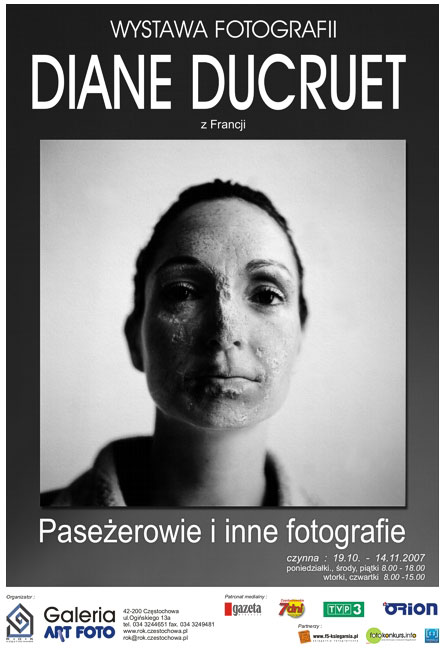 The works by Diane Ducruet – I wrote in “Kwartalnik Fotografia” – appear as a monumental project which, to some extant, is a substitute for traditional art, presenting art as life captured without dividing it into private matters, landscape or portrait. Perhaps this state could be described as “post” life of post-human in the post-feminism in the aspect of post-art. A number of art critics and philosophers try to describe the situation “after” or “post” [i].

The analogue system disappear nowadays from the photography. It often appears in hybrid form which is produced by scanning a photography and exposure at gelatine silver print. Faith in other qualities/values of photography as “time embalming”, “magical strength of picture and its negative” that is quality of photogene is generally disappearing. For some time there will exist a dichotomy that will express in certain kind of digital picture which will be going back to the techniques and aesthetics of the former period. This aspect can also be seen in Diane Ducruet’s creative activity which follows several ways. One of them derives from feminist art (Self-portraits) the other evolves from portrait and landscape photography – French, German, Scandinavian but it is hard to tell which it is[ii].  The artist uses negative photography as also digital processing       of photography.

Traditional way of thinking about photography? Things and words

Things and words series (Prolegomenas to a German Story) have been created since 2005. It mainly represents the latest German photography (Juergen Teller, Düsseldorf Becher school) and European in wider view. However precise classification is getting more unclear due to people migration and fast movement of conceptions and styles. In case of  Diane Ducruet it is rather following her own emotional states than specific aesthetic. It is connected with thinking about concrete place, seeking more than its character, feeling specific situation (Emily) and unique moment which might touch on monumental architecture, state of nature or image of cat. Many of those photos treat of fatigue, meaning of melancholy thus suffering of “bios” which can’t reconcile itself to running world with its beauty and hedonism of life.

Why am I leading the series out of the traditional photography? There are empathy with world and with strength of historic events related with memory (signs of World War II and communism). Artist shows interest in latest tragic history. Is she aware of how strong the view of concentration camp or remains of communist monuments in former GDR affects? This is painful history telling us that the photos can have the power of magic and metaphysics which reminds the meaning of death as the most important category in photography (Roland Barthes, Susan Sontag).

In the series artist shows us intimate and individual reception of the world. Camera just as eye  and brain finally records the oddity of this world and shows that every moment is important, transitory and ultimate. It can became an art form which may help in describing the world and expressing own feelings. It is hard to speak of the aesthetics of Diane Ducruet’s photographs and to judge if they are original or not. This conception doesn’t have such meaning as it was in modern art! Many similar pictures with alike aesthetics are made all over the world. Very important is to arrange a story even from parts of it just to show the oddity of the history or hidden tragedy of the world. Does Diane manage to do that? It is hard to judge from this perspective. There are surely pictures presenting fragile life, its threats and also hedonistic moments of fulfil. In this photographic world are as well depicted “lower beings” (cat, skeleton of bird) which are also come under the law of nature and death. All beings end at the cemetery which is our memory.

The series originally was called La Louvre. The most famous museum in the world was seen as fossils of culture. Later came out the new title – Passengers. Why such a title? Because we can be passengers who move from place to place, from country to country. Artist uses digital photo-montage in which she merge reality (portraits of friends) with antique sculptures from Louvre. We observe in the series a change of face physiognomy which changes into a stone. In this way artist puts together different signs of reality but the final effect is simulation about which Jean Baudriallard wrote in book Symulakry i symulacja [Simulacra & Simulation]: “Simulation however undermines the difference between true and false, real and imaginary”[iii]. Artist doesn’t believe in reality of world any more. She opts for imaginary and artificially generated world in quasi virtual reality. However Passengers series which was introduced by previous prominent portraits of American duo Aziz&Cucher is very interesting because it treats in another way about the end of humanism and human. “The end of human” in the meaning used by Jaques Derrida is in the opinion of Paweł Pieniążek is a disappearance of a man in general meaning  of existence, spirit or truth of being[iv]. At the photographs of Diane a man is being devoured by a disease, indeterminate plague which turns him into a stone. When did the end of a human begin in philosophical and artistic notion. With the axiom of seeking superhuman by Friedrich Nietzsche which was criticism or it is said (Jacques Derrida) the end of European metaphysics. Milou is wondering about this aspect in pessimistic text written in 2003 Things. It was written before the Passengers series (www.dididuc.com). Milou emphasises the meaning of Pygmalion myth, falling in love with ideal imagination and ideal beauty. In the same time he highlights that man is making similar to unidentified mass of people where he sees the God’s vengeance.

In which way the art should be developed when for many of the artist, including Diane there is no art horizon (thelos)? It is hard to say which of the photography conceptions being made by Diane would be continued in the future. There is no difference for her between analogue picture, digital processing or digital montage of pictures. I can see the difference. It lies in conviction that analogue photography was connected with tradition of former art and in the consequences with metaphysics or with artistic modernism which wanted to limit it and show modern, poor and wicked life (e.g. Henri de Toulouse-Lautrec, Brassai). Digital photography cancels those aspects because it generates new world – artificial and ideal without artistic battle. Digital picture and its specifics proves correct in advertising and cyberspace. I consider that we should and we have to stay in reality because “artificial paradises” which are made since times of Charles Baudelaire lead to nowhere. They are delusions and only transpositions and substitutes of reality. However nowadays digital photography is domain of technological and aesthetic explorations.

Theodor W. Adorno formulated his own conception of „apparition” referring to the theory of Walter Benjamin. His conception quotes to temporary glimmer e.g. fireworks which can be seen in the sky. Benjamin considered that the art deprived of atmosphere (“aura”) was based at the shock and the moment but as Adorno thought and Karol Sauerland accurately wrote “it is ready to destroy its own charm not resigning mystery and fascinating magic of destruction”[v]. Sauerland analysing aesthetics of German theorist of art wrote: “According to Adorno a chance to survive and at least to exist for some time have only those works which aim to capture and transcendent that what id temporary and transitory[…] If “apparition” means flash, faint touch then picture is paradoxical attempt to capture that what is at least lasting. In work of art there is made transcendence of moment [vi].”

In the continuance is the discussion about the digital picture in photography. Many of artists working on that kind of creation consider it is further non antagonistic form which continues heritage of modernism at times of postmodernity, liberal and global capitalism. Therefore “classical analogue photography” makes similar to traditional graphic techniques where are its roots. It is worth to emphasise that reduction of meaning of exact time of realisation cancels the idea of aura which is the faith in magical power of image which had religious or parareligious.[vii]

Because of that I am considered that in the same time will exist traditional analogue photography and digital photography continuing its achievements. Analogue photography will be a minority in the artistic industry in the whole world. Thus these are two ways which are going to exist simultaneously interfering each other as the paths in the woods bat those digital are going to be more visited. But it is known that most frequented routes not always leads the best and the fastest way to the target. Nobody wants to live in a labyrinth or its modern version of omnipresent rhizome created by Felix Guattarii and Gilles Deleuze in their famous novel A Thousand Plateaus: Capitalism and Schizophrenia (University of Minnesota Press, 1987). 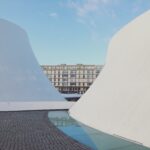 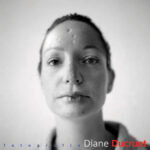