“The world as an unlimited construction” about D. Ducruet’s projects „Kwartalnik Fotografia” from Krzysztof Jurecki 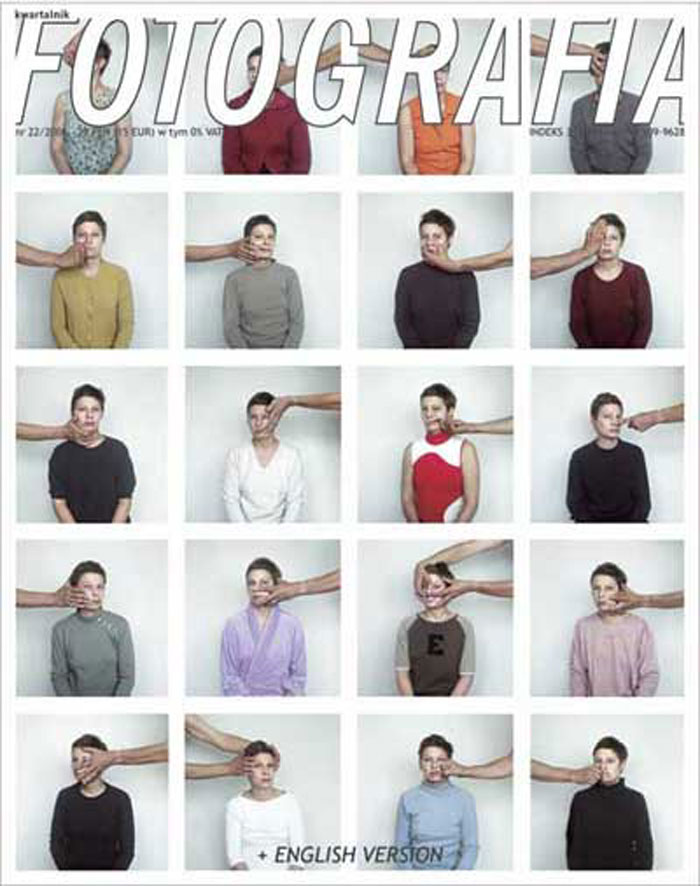 The works by Diane Ducruet appear as a monumental project which, to some extent, is a substitute for traditional art, presenting art as life captured without dividing it into private matters, landscape or portrait. Perhaps this state could be described as “post” life of a post-man in the post-feminism in the aspect of post-art. A number of art critics and philosophers try to describe the situation “after” or “post”. Zygmunt Bauman in his book Płynna nowoczesność (Liquid modernity) (Krakow 2006) has presented changes within modern society and crisis of traditional distinctions concerning a family. To some extent these postulates concern also Diane’s works.

Self-portraits
She has been taking them since the mid-1980s. Grimaces, strange postures, tomfoolery are the means to search for the artist’s “self” which is indefinable, since it is changeable and slips out of all rules, including the tradition of works by Diane Arbus, Cindy Sherman, but also perversion of body-art. Being a French, Muslim, or maybe a man >from the photograph by Robert Doisneau constitute a search analogical to the one conducted by Henri de Toulouse-Lautrec and then Witkacy in their photographic self-portraits. Is it disguising the identity or dispensing with it? Each one of them played with photography and with its use was hiding his artistic and private identity.
But in Diane’s photographs conceal archetypes of modern painting, including Goya or Caravaggio, which serve not as a symbolic message, but as a knowingly reduced basis for creating a compositional draft of a picture. Interesting are remarks of Milou whose comments concerning her works can be found at http://www.artphotography.online Very important are photographs in which Diane “plays” with her body, creating artistic forms from, for instance, her breasts. This is tradition of body-art; however, it is important for feminist art, e.g. Slovak Dorota Sadovska. Other self-portraits reveal the desire to be (at least for a moment) an angel, perhaps crucified, or a witch from Goya’s painting. Diane often changes convention so drastically that it is difficult to discover archetypes, which become disguised, hidden, and thus unclear, which is a positive distinguishing feature.
Does such a dressing up with no beginning and no end make sense? Yes, it does, since it expresses the only possible state of the present and of lasting, as we know nothing about the future. We are in the “post” time. In these photographs there is a lot of camouflaged information – we can guess at various citations, or maybe sampling. Are these images dramatic, obsessive, or are they the result of putting on a mask, hiding one of several psychical identities? I am not able to answer this question. Perhaps there is no answer to it so far!?

Idiots
It is the continuation of self-portrait; however, it is in color. The face is masked and changed, also by the way of presenting works which involves multiplying an image.

Family album (since 1995)
It concerns the father, mother and brother, who initially were captured in singular photographs. Later, photos of the father were presented in a tableau Father is dancing. Originally the works were entitled Dialog. They constitute fragments of paintings. Diane’s father was presented as St. Thomas from Caravaggio’s painting. Dialog consists of authentic, but also acted out scenes which refer to memory, a trace, as well as to vanishing. The images are full of melancholy – once young bodies fade, die slowly. They are full of sorrow, although deprived of fear and despair. It is also a dialog between the artist and her parents, not an easy dialog, rather empty, theatrical gestures. However, large format photographs, unlike the previous ones, can make an impression with their importunity, entering the intimate world of parents’ relations. Nowadays everything undergoes the process of deconstruction, is being taken to pieces, rationalized and deprived of any mystery.

Zoos and other series
These are reflections, fragments of reality, uncertainty of the moment. An elephant strolling in a photograph, or rather in our imagination, for a moment becomes a stone sculpture. An animal personifies and continues iconography of people. A dog can be as sad as a human being, so its psychological condition can be depicted. That is why in other series pictures of animals are mixed up with portraits of people. Diane with ease moves on from one topic to another, although she tells about the same – about the lack of constant references, lack of distance to people and events, since everything is covered by an unreal mist of fiction, fantasy and real episodes. The situation is similar in the next series.

Undressed men
Male characters are exaggerated, caricature-like, they remind of amateur photographs rather than criticism of consumer society by Diane Arbus from the 1960s. The series destroys the myth of a Renaissance man, developed and supported by modernity which attacked traditional values.

Post-feminist state
It seemed to me that Diane’s works followed the path of belligerent feminism of the 1970s or 1980s represented by Marina Abramowic, Natalia LL, or Orlan. However, they are more complicated. On one hand the whole culture, and thus art, expresses such leftist postulates, e.g. Pedro Almodovar, and on the other hand tries to modify them, combine with religious spaces, including Gnostic, which was achieved probably only by Natalia LL. However, the young generation, to which Diane belongs, has experienced the victory of feminism, obviously limited to certain spheres and phenomena of culture and political life. That is why this state the artist herself calls the state “after”. What does it mean? Diagnosing own “psyche” and “bios”, analyzing faces, masks, body, but also family, and in broader sense also society she lives in, because in this way the series Zoos can be perceived. These works still attack status-quo, although make use of modern benefits offered by consumer civilization. For Diane art is an endless text, and her task is examining grammar of the language of personal relations.

What does Diane depict?
She is aware of any fragment of the reality taking place either in Bratislava, Berlin, London or any other place. Each manifestation of reality is potentially important for her, even if it is seemingly trivial. Out of each situation she creates an image in her own, usually pessimistic style. In her works, just like in works by Arbus, the state of reflection upon the situation of a human being prevails; reflection which is also melancholy understood as sorrow and grief (but not despair) because of vanishing beauty, or the lack of it. Diana’s world is very pessimistic, decadent, maybe a little egocentric, but also familiar, as it expresses the state of searching and awaiting. Although it is unclear what and whom is being searched for and awaited. Religiousness of her artistic vision has been reduced to minimum, to iconographic patterns only, and it does not concern the myth any longer. But on the other hand, however, these photographs evoke compassion to everything that vanishes, what is transient and fragile, just like life.

Text from Krzysztof Jurecki  : «The world as an Unlimited de-construction», Kwartalnik Fotografia, Poland 2006